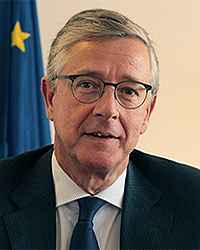 João Aguiar Machado, is Director General for Maritime Affairs and Fisheries at the European Commission since September 2015.

J. Aguiar Machado is in charge of implementing the EU Common Fisheries Policy and to promote an integral approach to the EU Maritime Policy.

Before taking up his current position, Mr Aguiar Machado was Director General for Mobility and Transport at the European Commission.

Between 2009 – 2014, Mr Aguiar Machado was Deputy Director General at the European Commission’s Directorate-General for Trade.

He was responsible for bilateral trade relations with Asia, Latin America and Africa, including many of the EU’s free trade negotiations, and for trade in services, investment, intellectual property and public procurement.

From September 2007 to December 2008 he was Deputy Director-General at the EC’s Directorate-General for External Relations – where he was in charge of coordinating overall EU relations with Asia and Latin America. Mr Aguiar Machado spent most of his career working on trade matters in Brussels and in EC Delegations in both Tokyo, Japan (1989 – 1994), and Geneva, Switzerland (WTO, 1994 – 1998).

Mr Aguiar Machado studied economics both in Lisbon and at the College of Europe in Bruges.