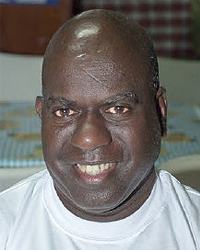 CEO
The Parties To The Nauru Agreement

Ludwig Kumoru is PNG national and is since April 2016 CEO of the Parties to the Nauru Agreement (PNA), based in the Marshall Islands. He was formerly the Deputy Managing Director of the National Fisheries Authority (NFA).

The position has seen him take the leading role in a region that controls over 60 percent of the global skipjack catch within its waters. On appointment within the PNA Office, he was praised for a skill set including the ability to work with fishing states from a national perspective, and having an extensive understanding of the Pacific tuna fishery.

Kumoru has been a key part of the NFA’s reformed fisheries act, which is focused on increasing the production of canned tuna within PNG, one of the PNA’s major island nation members.

He also has previous experience in stock assessments through his work as a member of the WCPFC’s Scientific Committee.

Fish schools associating with marine debris is a natural phenomena that in artisanal fisheries has been exploiting for thousands of years, but in the last 2 decades man has industrialized the process with artificial FADs mass deployed and the ability to track and even integrate them.

Changes from VHF tracking to satellite tracking allowed more to be tracked, but sets were still hit and miss, but in the last decade sonar capability and mass deployments has been a “game changer”, where fishing has become more a “cherry picking” process that hunting wild fish schools.

By targeting only large aggregations of tuna under a FAD, it is in itself possibly a conservation measure for some non target bycatch species. But what is the true impact of such high levels of FAD deployments distorting the ecosystem, tuna school size, stock structures, bycatch and conservation? Indeed in markets where consumers are increasingly mindful of sustainable sourcing trends, this are increasingly relevant questions in the market, not just the interests of PNA nations.

When we look at the status of stocks in other RFMO and the very high Fad dependency in each, it justifies the need for FAD tracking as a vital component of PNA FIMS, to compliment e-reporting and other aspects of governance of the tuna fishery in PNA water. It is critical to better understand the life of a FAD and the direct and indirect impacts of FADs on juvelines, mixed stocks, bycatch, as well as industry economics, the invisible costs of ghost fishing, marine debris, habitat damage.

This work has broader implications in the overall dynamics of the whole tuna sector in PNA waters and the broader WCPO.